The Gammalord
A selection of pics taken during the Gammalord campaign 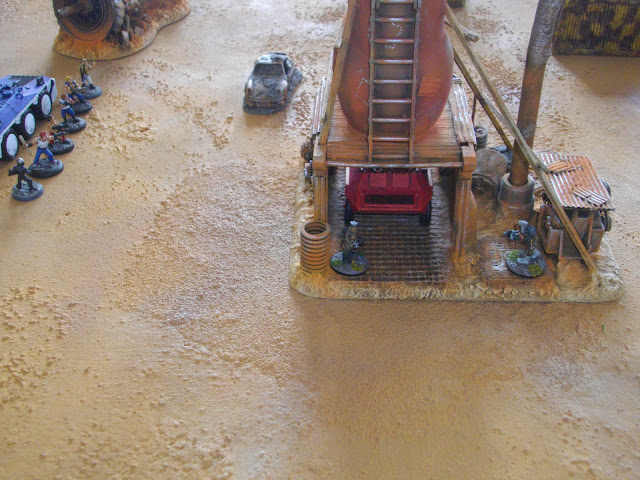 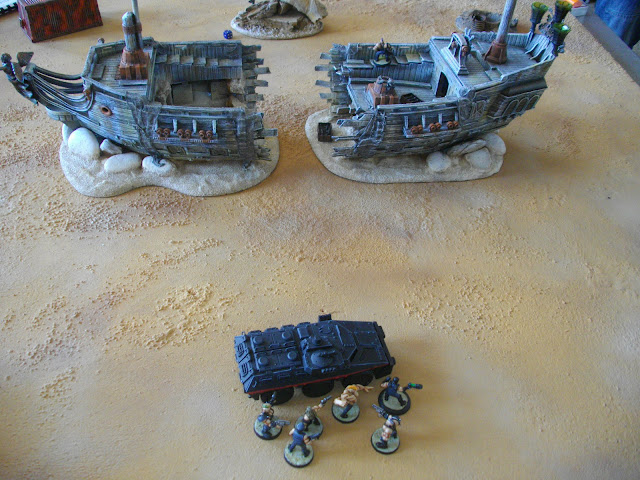 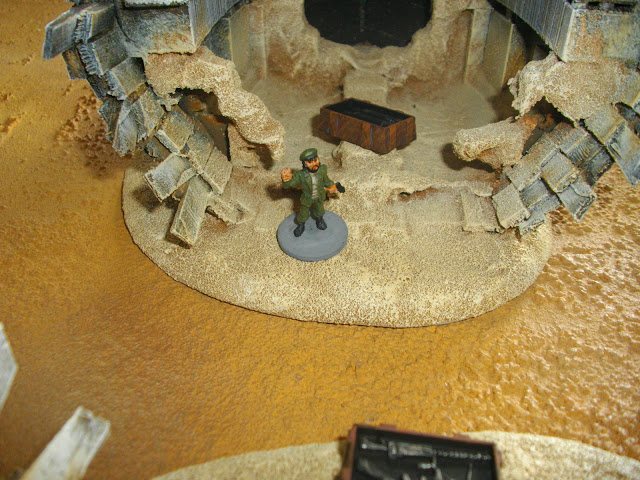 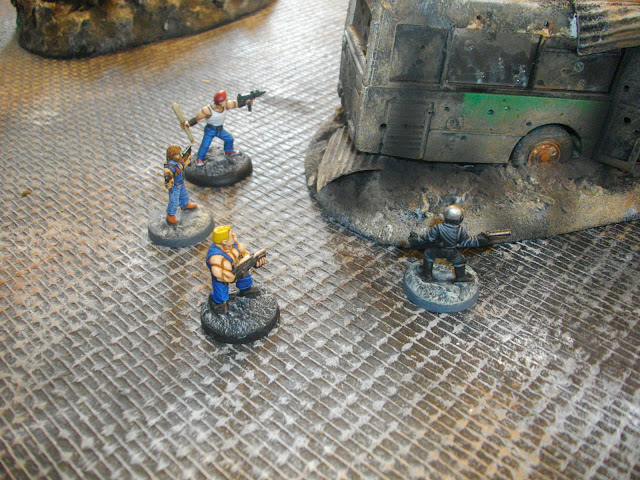 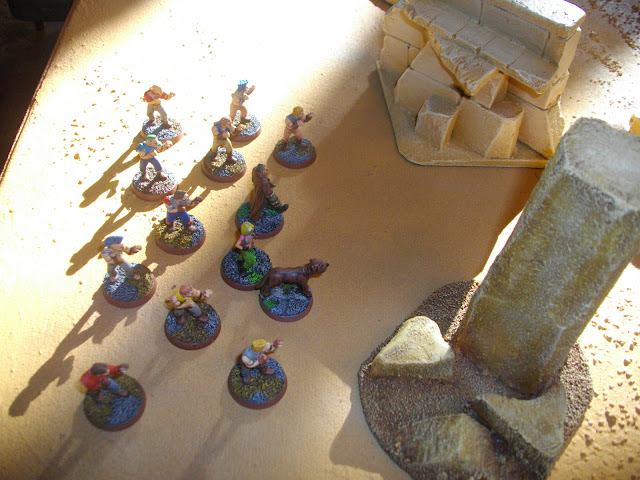 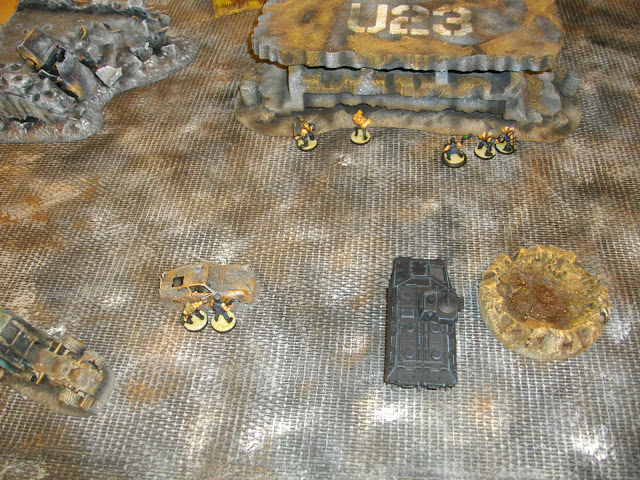 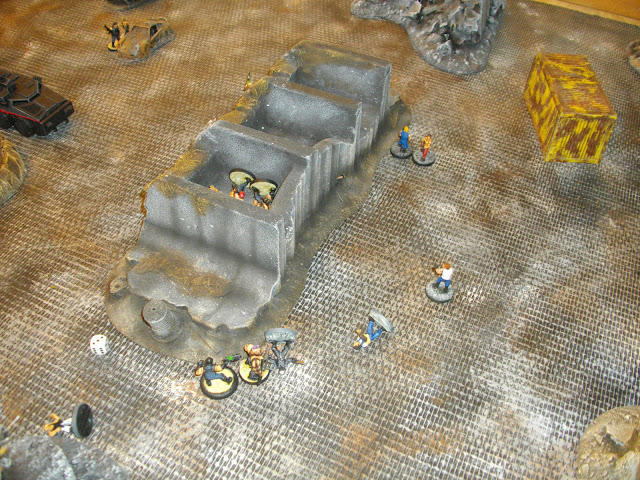 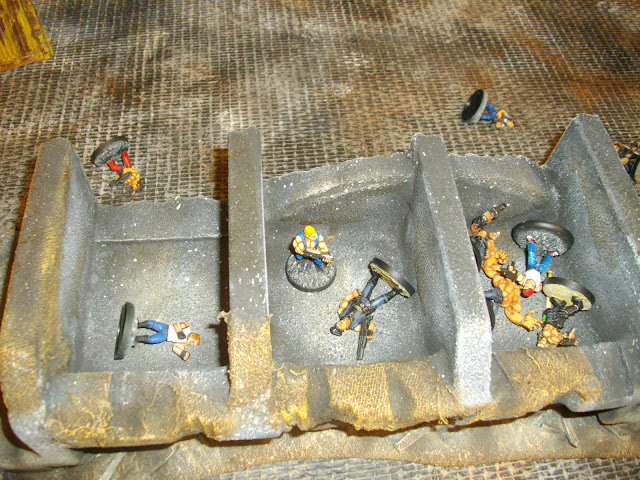 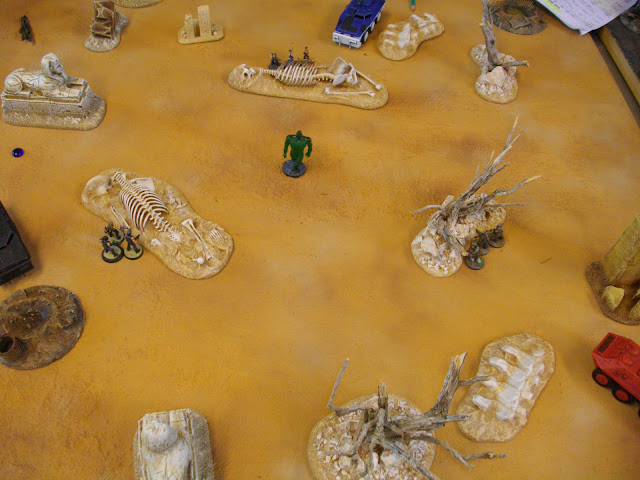 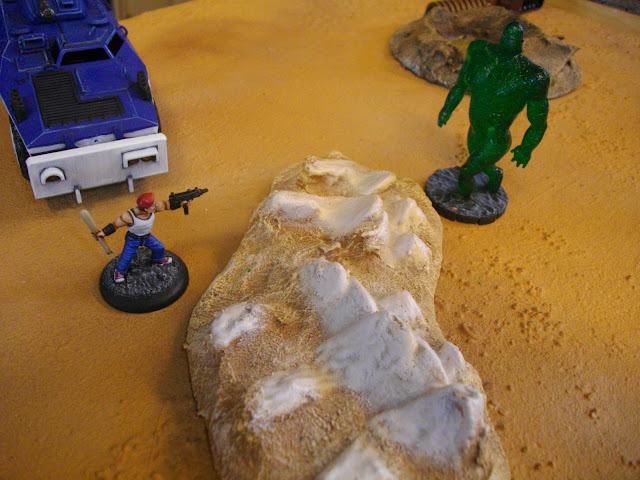 For an unknown reason, Max Königstiger (aka "The Cream of the fight", aka "The Greatest Yankee Hero Ever") has taken a few rookie gangers to an emergency expedition in the Rad Belt and he has been unheard of since then. A rescue team has been sent to the place where Max's ride, the Liberty Wagon, was spotted. Much to their surprise, a group of NeoSov agents led by Colonel Zanzibar himself is also investigating the area. 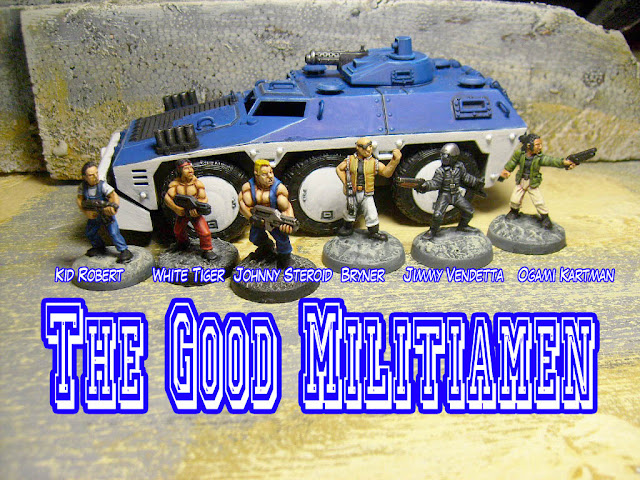 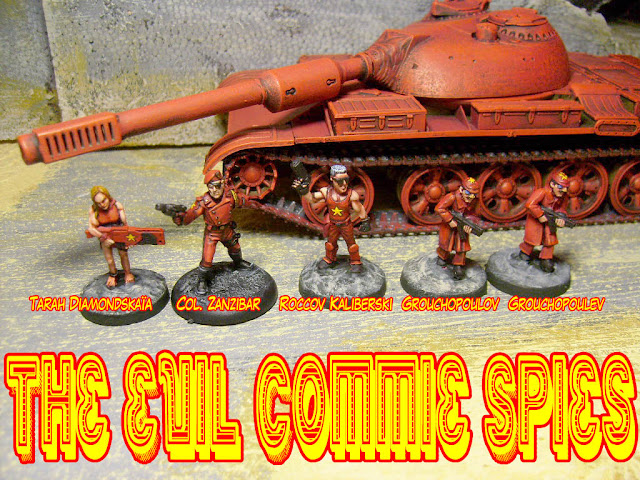 Both gangs could qualify as "Elite" starting gangs - they're looking after the mighty Max Königstiger after all!
The Yankees have two Level 2 gangers armed with a Pulse rifle/autoshotgun combo (in case the pulse rifle -an Advanced weapon- goes click). The rest are Level 1.
The Sovs have Level 2 agents (including one with plasmagun), while Zanzibar is a level 3.


Deployment
Deployment is Planned, in Line formation. Gangs are Watching (ie, they start the game with a reserved action). 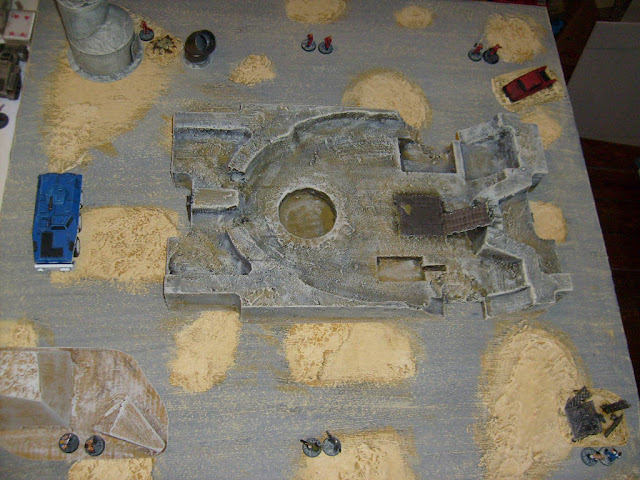 The NeoSovs decided to place Tarah and her plasmagun so that she covers the access to the ladder (left in the picture) that leads to a key position (an elevated heavy cover with a view on all the ruins). While she contains the most dangerously armed gangers, Grouchopoulov and Grouchopoulev would rush to the center and search the ruins, and Zanzibar and Roccov would probably have no problem dealing with the weaker gangers (right in the picture).

Now, the New Yorkers' plan of course was to break through that containment corridor. If either Johnny Steroïd or White Tiger (deployed together down left in the pic) could climb up that ladder with their pulse rifle, they'd probably have the upper hand.

The New Yorkers have the initiative, and start with the following gambit: bring a cheap ganger to the left so Tarah uses up her reserved action (and therefore doesn't use it to boost her defense, or shoot the pulse rifle carriers). If the ganger survived his second move action, he could attempt to Give an order to Johnny Steroïd so he shoots Tarah down immediately, before she activates and therefore has the opportunity to reserve another action.
It was a very pretty cool plan.
But it didn't work - Ogami was blown to bits by the plasma balls. White Tiger and Johnny did try to shoot her down using their initial reserved action, but the shot was a difficult one because of the distance and cover, and they missed. 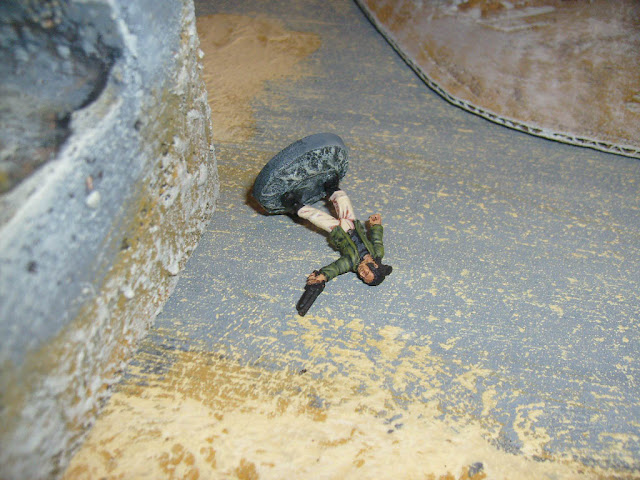 Confident in Tarah's cover, the NeoSovs decided to send Grouchopoulov immediately into the ruins so they had one agent covering the area with a reserved action, which would make any Yankee intrusion hazardous. But this allowed them to fire at Tarah on their next activation - Johnny silenced her plasmagun for good, and immediately ordered White Tiger to leapt out of cover and rush to the ladder!
The Sino-American warrior decided to keep an action in reserve in case Grouchopoulev (the second agent in the center) tried to go round the corner to shoot him. But he decided to follow Grouchopoulov, which gave the commies a solid foothold in the ruins. 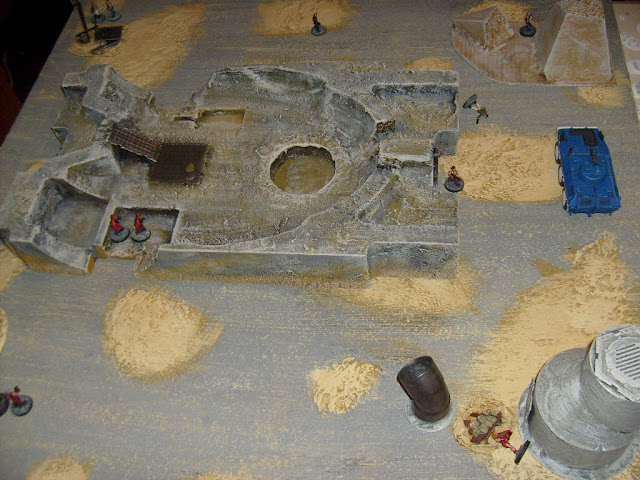 Bryner attempted to secure the other flank. 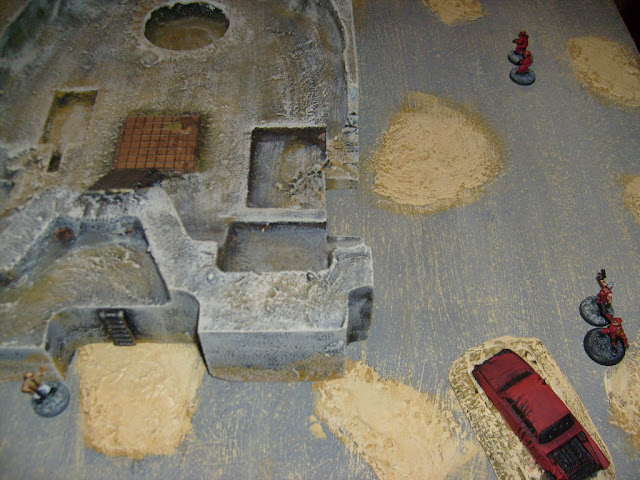 But despite Kid Robert's support fire, Zanzibar shot him easily.... 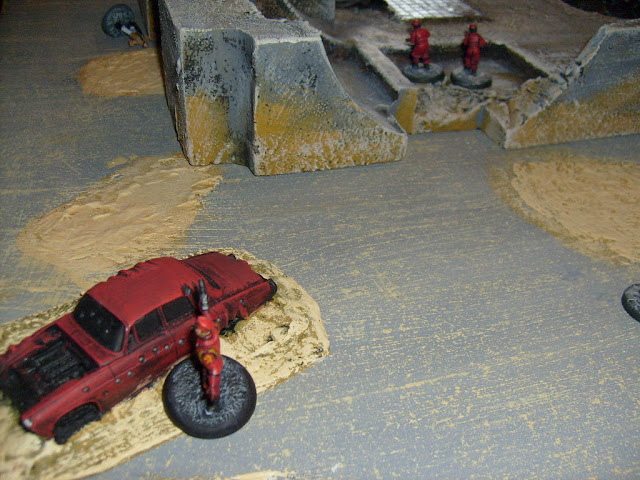 ... allowing Roccov to get to the other ladder. 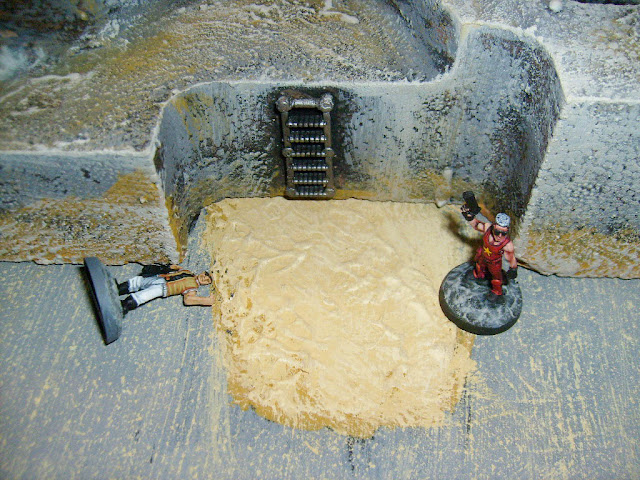 Then Jimmy Vendetta carefully moved to the center, hiding from the Grouchos, and Kid Robert missed  his shots at them again - and Turn 1 was over.
With respectively 1 and 2 casualties, neither the Neosovs nor the Yankees had to test for rout. 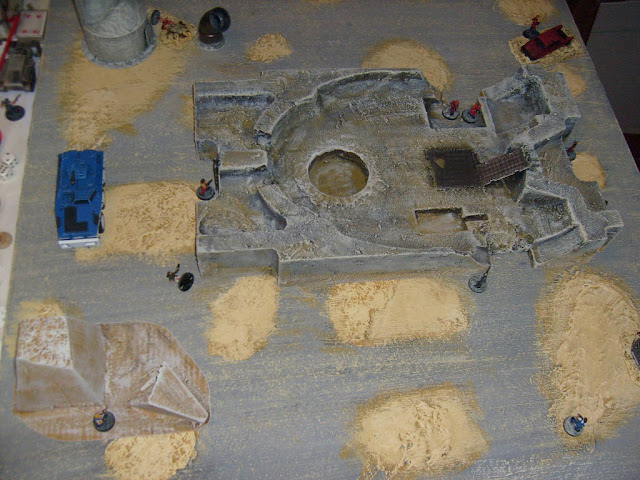 Turn 2
The Neutron Yorkers got the initiative again. White Tiger climbed up the ladder and moved into position. Grouchopoulov and Grouchopoulev fired their reserved attack at him - and blamed the heavy cover for missing him.
With two actions left, White Tiger could fire his pulse rifle at both agents, killing one.

The Commie response was perfectly symmetrical: Roccov climbed the ladder on the opposite side, killed Jimmy, and nearly managed to get Kid Robert as well. 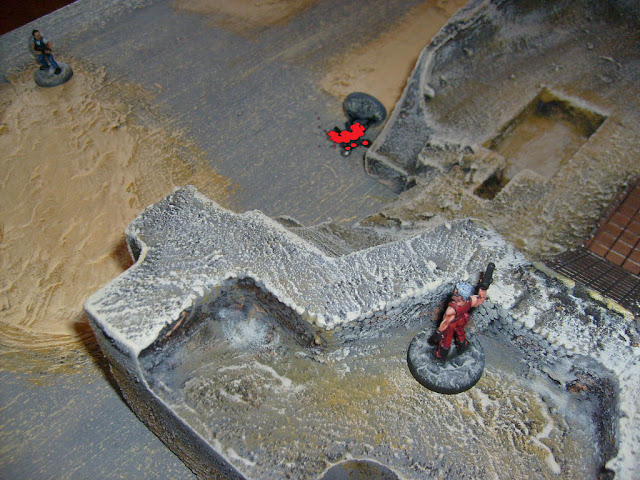 Zanzibar and Johnny Steroïd ran to follow their partner, both reaching the bottom of the ladders. More gunshot was heard - it was Kid Robert losing his duel against Grouchopoulev.

The turn was over. With 4 gangers down, the Yankees had to test for rout - and against all odds, both Johnny and White Tiger failed!
So the victory was clearly Red. 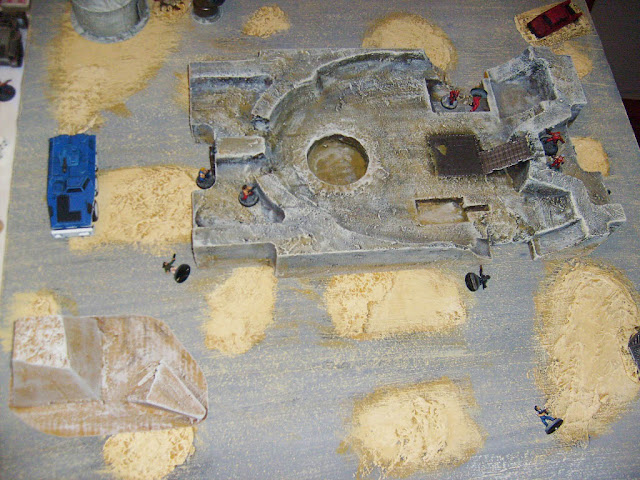 We did, however, play a Bonus round ;)

Turn 3
The Yankees got the initiative once again - the vengeful White Tiger fired at the 3 red agents facing him, and took down two!

Roccov, the survivor, felt it was time to scrutinize the place as thoroughly as he could, from his position - he spent his 3 actions to "Search". Johnny Steroïd failed to kill him, so the remaining Sov Agent, alone with his short range weapon and facing two raging Yankees, decided to leave the area with the info he collected. The game would then have been a draw.