Some new reviews of Neutron York 3000 are up:
- on Mattblackgod's blog. Danny's the mighty overlord of the post-apoc forum, and he's posted an NY3K game report just a couple days ago.
- in issue 15 of Blogurizine (in French)

Honesty demands I mention that both reviews were written by buddies of mine; if that bugs you, you can still leave the appreciative comments aside, stick to the factual ones and find them quite informative articles.

Last week-end, we played a short NY3K campaign in Ivry, at the "Grenier des Légendes" (The Attic of Legends) gaming club, where they have lots of lovely terrain.
You'll find a selection of bigger pics in the "Action" section of the blog.

It all started when some strangers wanted a quick wipe on their windscreen and Kid Robert wouldn't take their rubles. Max Königstiger quickly arrived to set things right - which soon involved heavy gunfire. 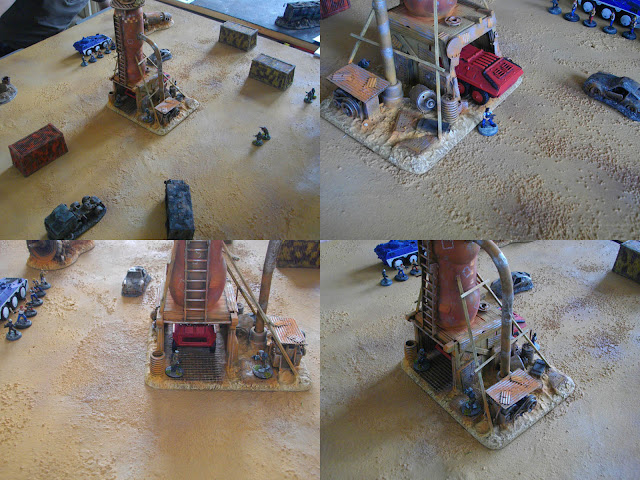 Revolution in the Wastelands


Meanwhile, a group of communist partisans dared assault Jakar Nilson's weapon cache. They succeeded in seizing weapons of mass hurting, which they wouldn't be long to use for revolutionary purposes. 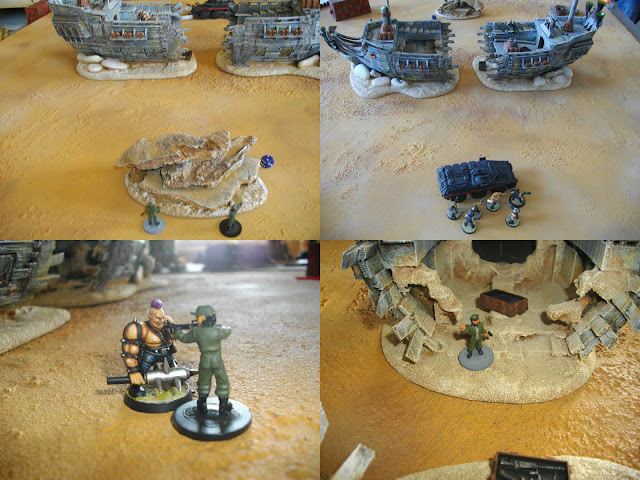 Hours later, the commies started their operations in the city. Despite Max's efforts, they managed to detonate several bombs and cause major disorder in Brooklyn. Fortunately, the terrorists died in the explosion of their last bomb. 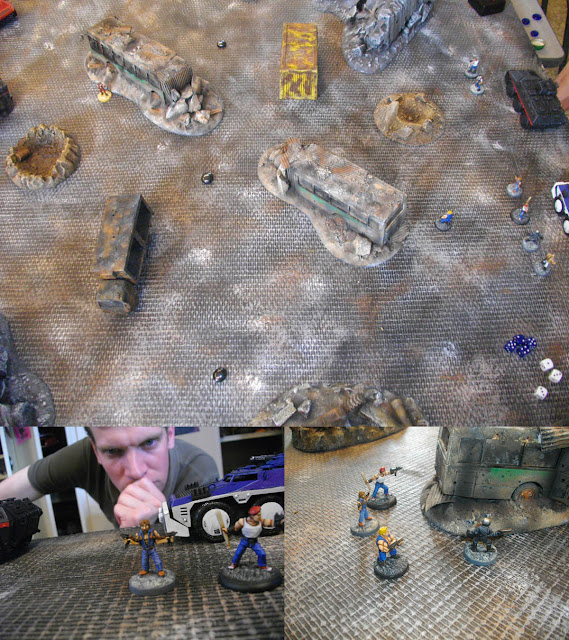 As they were seeking refuge in the ruins of Cairo (NY), the commies had to face the obvious: they weren't welcome there either. 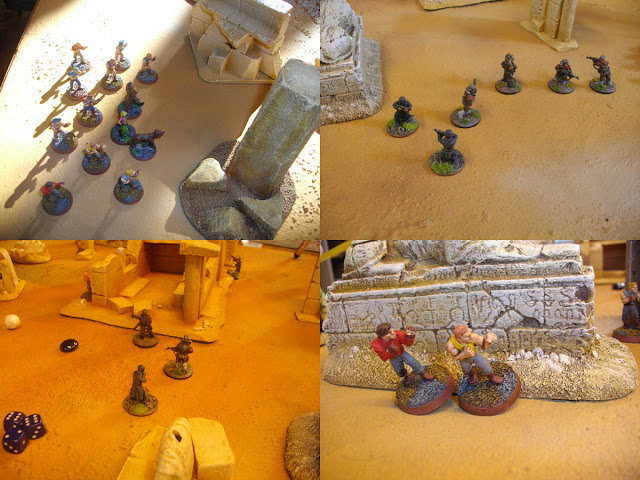 Demoralised, and having suffered heavy casualties, they fled through the radioactive desert. Only elite troops such as these could find their way through the sandstorm that rose - but even they couldn't guess they would cross Jakar Nilson's territory, and actually head right to his mighty skull mausoleum. 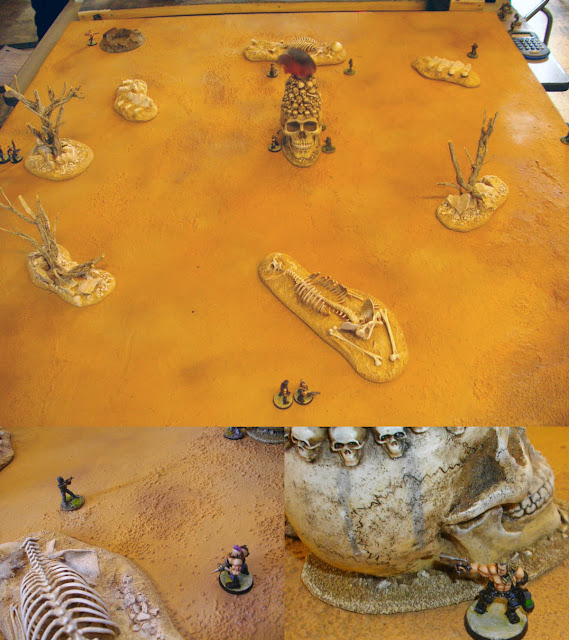 While the NeoSoviet elite troops once against managed to escape, Jakar had no problem making their younger local recruits talk. Two things caught his attention - the first was about some sort of funky desert rad mutant, the other was the use being made of his own weapons in Neutron York.
When there is chaos, there is Jakar - he immediately set out to Neutron York. As he was about to pass the city's defense lines, his arch rival was bound to be in the way: Max Königstiger. 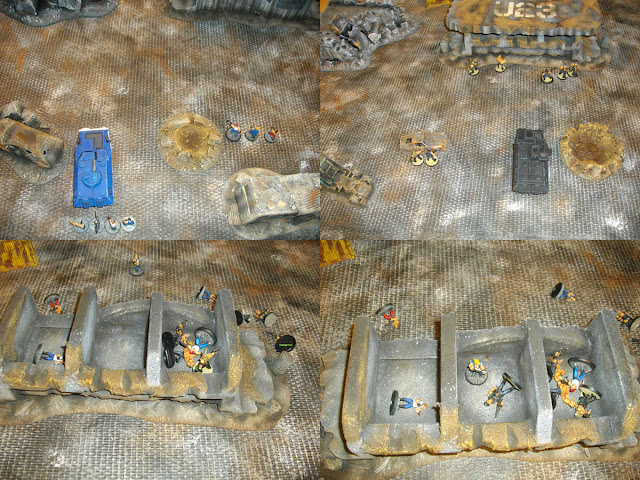 When Max Königstiger heard that story from one of Jakar's dying gangers, he knew there had to be something about those NeoSoviets commandos looking for a radioactive glow-in-the-dark monster. He jumped into the Liberty Wagon and immediately rushed into the wastelands.
As for Jakar, no matter the bitter defeat, the casaulties suffered by his gang or his own wounds - if he felt something was important to Max, he had to ruin it.
The last survivors of the three gangs met in the radioactive desert - whoever wanted to emerge victorious would have to defeat not only the the other two, but the Gammalord. 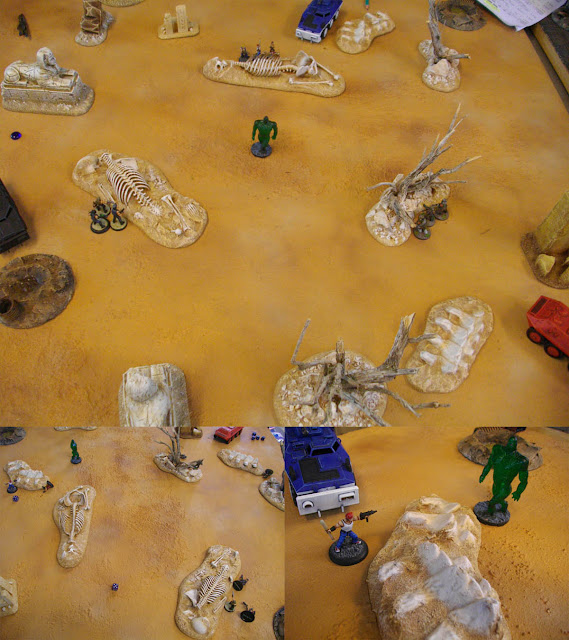 When he saw the monster, Max quickly understood the soviets were planning to toss him into one of their nuclear reactors and use his radioactivity to power its turbines - or maybe create a new weapon of mass destruction! After a bloody firefight, Max himself confronted the monster - and, in one of his legendary feats, killed him and once again saved the day!

The minis are out!

These were much awaited - and they're finally there! 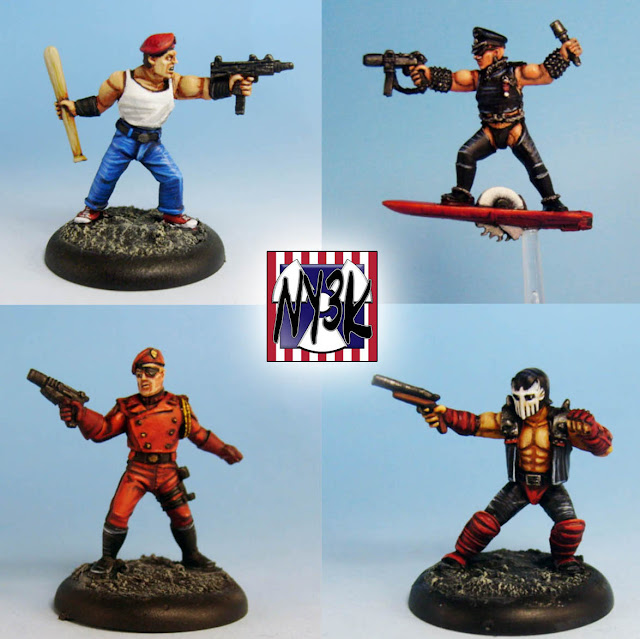 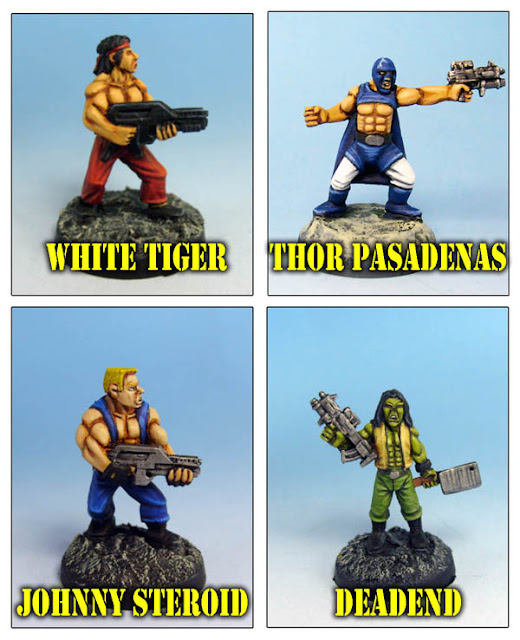 Thank you very much for your patience and support, I hope you enjoy these! :)

First, I hope you all had a happy holiday, and wish you and yours a very happy 2012!


One of the gaming-related highlights of the holiday for me was the recent feedback received on the game.
NY3K is currently rated 8.66/10 overall on WargameDownloads. Granted, that's on 3 customer reviews only and still less than Golgo Island (I just realised it was rated 9.34/10!) - but it's far from a bad start, and it's a real pleasure to see fellow gamers enjoying the rules :)
The icing on the cake is the cool batreps some fine folks of the Post-Apoc forum posted. With their permission, I'm sharing them here.

Many thanks to them for taking the time to share those games!

While I'm at it, I heartily encourage you to visit the forum, if you never have - it's got to be one of the coolest places in the tabletop gaming internet.

A "Questions & Answers" section has been added to the Extras. It'll get updated thanks to your feedback. 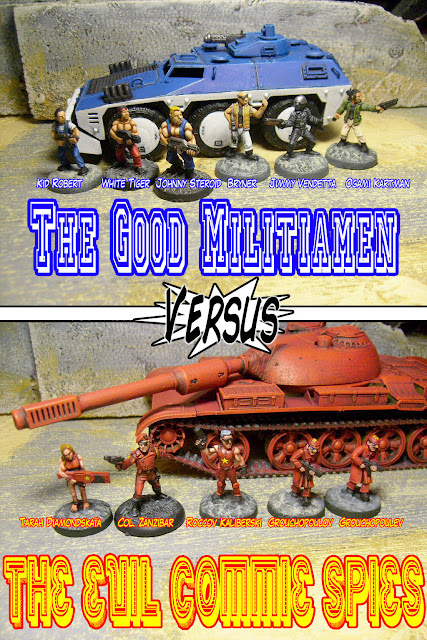 Read more in the Action section!

I have added 2 examples of competitive gang lists - at least, gang lists that have a tournament-oriented plan behind them. You'll find them in the "extras" section.